While eating with his family at the Champs-Elysees McDonalds, Dr. Mann was accosted by three employees. In front of Mrs. Mann and her children, the uniformed men destroyed his property, ate his food, attempted to pry off his implants, and manhandled him onto the street. 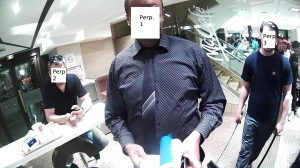 Unless I’m very much mistaken, this is the first account of an unprovoked assault on an augmented human. Dr. Mann has inadvertently become something of a cyborg Rosa Parks, and how his case plays out will set precedents and draw lines in the sand.

Without a doubt, the McDonalds employees were bizarrely violent and will be fired like any employees who assault customers. The interesting part is why they did it.

Dr. Mann’s setup isn’t Google Glass-style wearable computing, and it isn’t Accelerando-style augmented reality. His is a sousveillance or personal-vision device, purpose-built to capture and broadcast point-of-view video. His assailants knew this – after all, they read his ‘doctor’s note’. What worried them, and what will inevitably convict them, was that they and their restaurant were recorded, transmitted, broadcast, critiqued semi-automatically.

On one hand, Dr. Mann got detailed first-person video, or at least high-resolution pictures, of the entire incident, which will ensure justice. On the other hand, the assailants clearly were not comfortable being monitored. Although the law is on Dr. Mann’s side, and the taping was legal, doing so is not in good taste.

His altercation, free to proliferate on the Internet, rapidly incited a virtual lynch mob on Reddit, held at bay only by Dr. Mann’s smart decision to block his assailants’ distinguishing features. Fans wasted no time in digging up as much contact information about the restaurant, and its employees, as possible.

So what to make of this? As usual, the future will march on. If the market demands that wearables be camera-enabled, then physical privacy will vaporize as inevitably as music protection. It will be unstoppable the same was as texting while driving is unstoppable. No justice system can handle ubiquity. Perhaps in the near future, malfeasance of all types will be dispersed as readily as Dr. Mann’s story.

But the other side of the story still stands. People value their privacy, regardless of the relentless technological march. If technology like Mann’s becomes commonplace, clashes like Mann’s will rise as well. Cyborg racism will ignite on Capitol Hill as well as bars, restaurants, buses, and anywhere people once expected to avoid remote judgment.

My only hope is that as stories like begin to break, cyborgs share Dr. Mann’s foresight, letting systematic law,  not virtual lynch mobs, enforce justice. We must remember that it takes more than evidence to convict – all the first-person crime video in the world is a liability in the hands of vigilantes fueled by righteous anger.